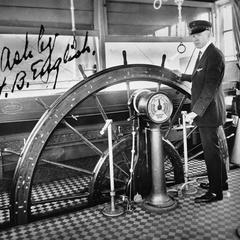 FINAL DISPOSITION: Sank at Pittsburgh in January 1940; her wreckage was burned on February 17, 1940

OTHER INFORMATION: Ways - 4615; Architect Captain J. Frank Ellison was also supervisor during her building. The Queen City was designed for high class patronage at a time of affluence. Captain Ellison was influenced in his design by the Idlewild and he had made a study of Great Lakes steamers which he utilized. Her mahogany cabin was finished in gilt trim and the ceiling was of pressed metal sheets with ornate design. She had wire mesh railings studded with rosettes. She had a carved figurehead rising from her stem which she retained until she was rebuilt at Mound City, Illinois in 1920. A metal Queen City emblem in gold appeared on each stateroom door. Her grand piano was presented by the Cincinnati Chamber of Commerce. She had oil paintings on the rounded cabin bulkheads. She had shining brass oil lamps in swinging brackets and overhead lights coming from twined oak leaves of metal. Queen City and her sister boat, Virginia, were advertised in Pittsburgh's social register and bro

PHOTO DESCRIPTION: Harry B. English at the wheel