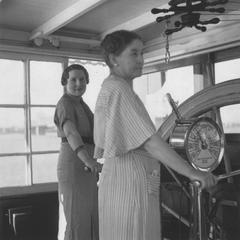 OTHER INFORMATION: Ways - 5341; Rebuilt from the Kentucky (built at Jeffersonville, Indiana, 1904). Originally owned by St. Louis and Tennessee River Packet Company, in 1927 she was sold to Dick Dicharry who took her to the lower Mississippi. In 1937 she was the last remaining steam packet on the lower Mississippi, publicized in Thomas Benton's book, An Artist in America

Partner
Recollection Wisconsin
Contributing Institution
University of Wisconsin Digital Collections
Subjects
Sternwheel packets
Pilot houses
Interiors
Hughes, Telia Vasughn
Packets
Mississippi River
Type
image
URL
https://digital.library.wisc.edu/1711.dl/XRJQ6HXX5XDYF8I
Standardized Rights Statement
This Rights Statement should be used for Items for which the copyright status is unknown and for which the data provider has not undertaken an effort to determine the copyright status of the work.
http://rightsstatements.org/vocab/CNE/1.0/
Rights