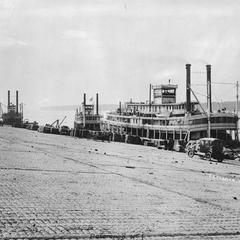 PHOTO DESCRIPTION: The Senator Cordill is in the front, on the right. Other boats are not identified. A couple of early 20th-century automobiles are on the wharf along with stacks of cargo

Partner
Recollection Wisconsin
Contributing Institution
University of Wisconsin Digital Collections
Subjects
Sternwheel packets
Packets
Mississippi River
Kanawha River
Ohio River
Mississippi--Greenville
Type
image
URL
https://digital.library.wisc.edu/1711.dl/2RWXIQ5UM2GTM8S
Standardized Rights Statement
This Rights Statement should be used for Items for which the copyright status is unknown and for which the data provider has not undertaken an effort to determine the copyright status of the work.
http://rightsstatements.org/vocab/CNE/1.0/
Rights