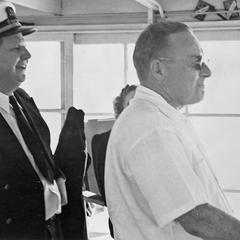 OTHER INFORMATION: Ways - 2387; Built for the Eagle Packet Company. In 1935, Captain Tom R. Greene of Cincinnati and his mother, Captain Mary B. Greene, took a momentous step in the annals of inland river passenger traffic. They chanced their hard-earned savings on the purchase of a big oil-burning steel-hull stern-wheeler and converted it into a "tourist" boat. They were convinced that vacationists still wanted to visit Cincinnati, New Orleans, Chattanooga and elsewhere by water to the tune of a splashing paddle wheel. They purchased and renamed the Cape Girardeau to the Gordon C. Greene to honor the Greene Line's founder, Captain Tom's father. She was the "family boat" with Captain Tom R. Greene in command and his mother usually aboard, his wife Letha and family frequently along with Captain and Mrs. Jesse P. Hughes. In the spring of 1936, a second texas deck was added and the pilothouse was raised 28" at Cincinnati. Again in November, 1937 the texa