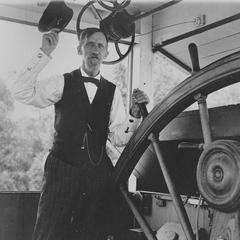 OTHER INFORMATION: Ways - 5174; Original price $21,600; home port or owner's residence circa 1902 was Memphis, Tennessee. Owned by the Lee Line, she ran St. Louis-Memphis. On October 21, 1910, grounded in a light fog at Slough Landing, she was left high and dry by a rapidly falling Mississippi River, with an estimated damage of $15,000. Down bound on October 21, 1916, she sank four miles above Memphis, with water at the back end of the texas. Purser Nick Jokerst and second clerk Walter Jeffords rowed a yawl to Memphis and got the Bart Tully to come up for the passengers. This was the same day the Cape Girardeau sank off Fort Gage

Partner
Recollection Wisconsin
Contributing Institution
University of Wisconsin Digital Collections
Subjects
Sternwheel packets
Pilot houses
Interiors
Packets
Mississippi River
Type
image
URL
https://digital.library.wisc.edu/1711.dl/YLVRYAU46E4IX8J
Standardized Rights Statement
This Rights Statement should be used for Items for which the copyright status is unknown and for which the data provider has not undertaken an effort to determine the copyright status of the work.
http://rightsstatements.org/vocab/CNE/1.0/
Rights