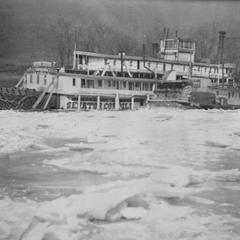 PHOTO DESCRIPTION: The Senator Cordill, sunk, is in the background. The smaller boat next to her is the U.S. diesel electric Tecumseh. The man on the ice is Evart Thistle. Mory Henderson is the man on the Tecumseh