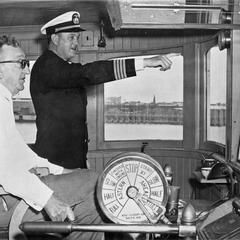 OTHER INFORMATION: Ways - 1504; Fabricated at Glasgow, Scotland along with her sister ship, the Delta King. All steel work done on the River Clyde at the Isherwood Yard, Glasgow. Both boats were knocked down and the sections sent by steamship to San Francisco and then barged to Stockton where the boats were completed. The building operations extended from 1924 through part of 1927. Her machinery was built at Denny's Shop in Dumbarton; the paddlewheel shafts and cranks were forged at the Krupp Works, Germany. The upper cabins were built by U.S. shipwrights, four decks high, largely of oak, teak, mahogany, and Oregon cedar. When completed the two boats were the most expensive river sternwheelers extant, costing $875,000 each. In the beginning of her career she ran in the San Francisco-Sacramento trade on a regular year-round schedule. Frequent excursions were made to Stockton. She frequently carried 800 tons of freight. The staterooms slept 200. Rooms and passenger areas were air-co

PHOTO DESCRIPTION: Captain Hamton and another gentleman in the pilot house